Here’s How Long-Term BTC Investors Are Playing the Bitcoin Consolidation, According to Glassnode

Crypto intelligence company Glassnode is analyzing the behavior of long-term Bitcoin investors as the leading crypto asset continues to consolidate below $60,000.

In a new tweet, Glassnode highlights to its 193,100 followers the importance of tracking the movement of long-term holders (LTH).

According to the data analytics firm, when long-term holders spend their BTC stash, it is a signal indicating that the boom cycle is nearing its conclusion. While the cohort took profits as Bitcoin rose from $10,000 to over $50,000, Glassnode says that a new batch of long-term holders is accumulating BTC at current levels.

“At 2017 top, LTHs had reduced their holdings from 74% to 58% of circulating supply. Currently, coins accumulated in late 2020 are maturing and LTH-owned supply is actually increasing > 67%.” 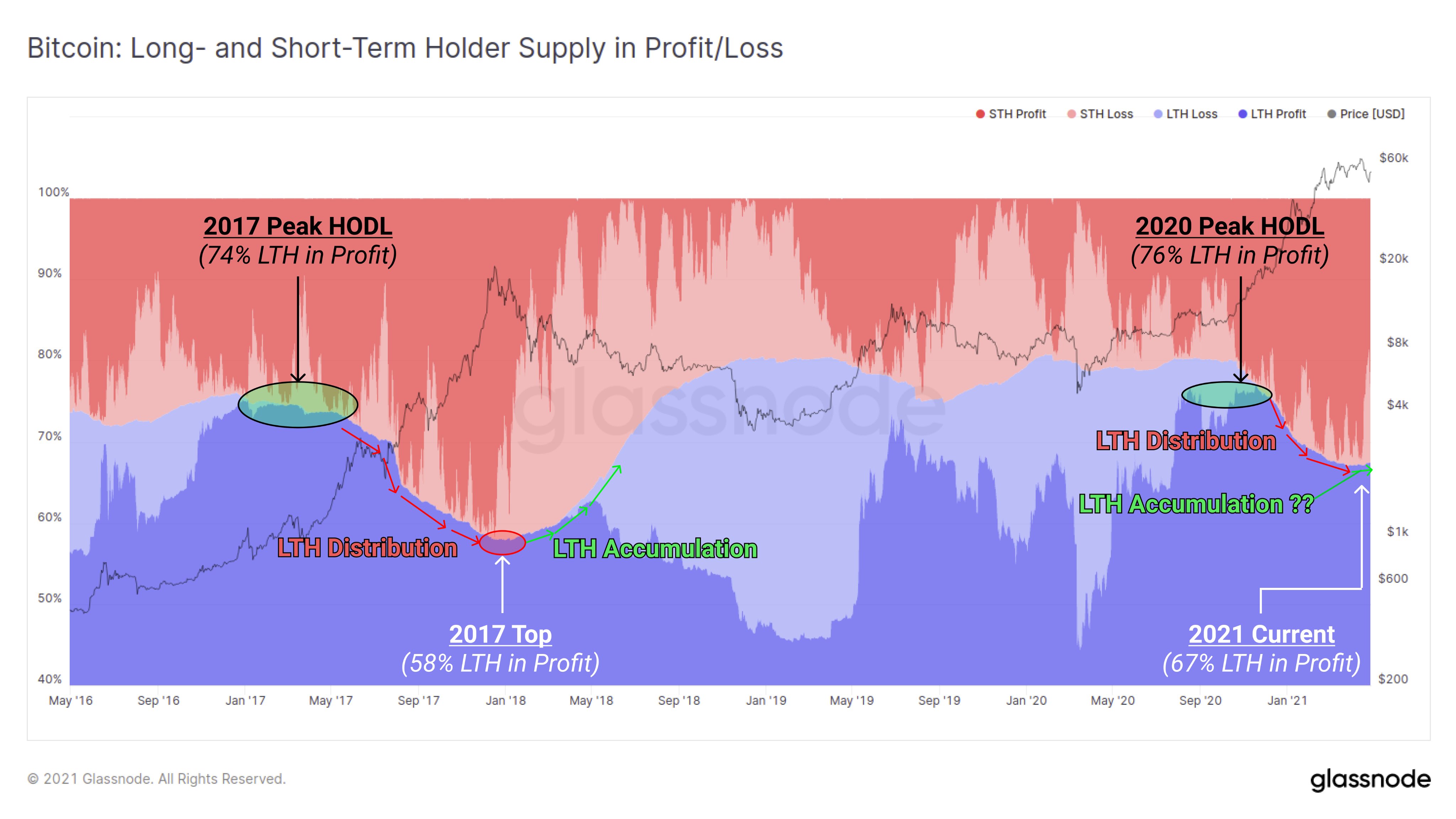 Another indicator that Glassnode keeps a close eye on to track the behavior of long-term holders is the coin days destroyed metric, which looks at the value of each Bitcoin transaction while giving weight to the number of days since the coins were last moved.

The crypto insights platform says that the 90D coin days destroyed metric, which quantifies the amount of coin days destroyed in the last three months, has returned to a level suggesting that long-term investors are holding on to their Bitcoin troves.

“After an initial increase towards the beginning of the year, [90D coin days destroyed] has reset back close to baseline levels – indicating increased hodling from long-term investors.” 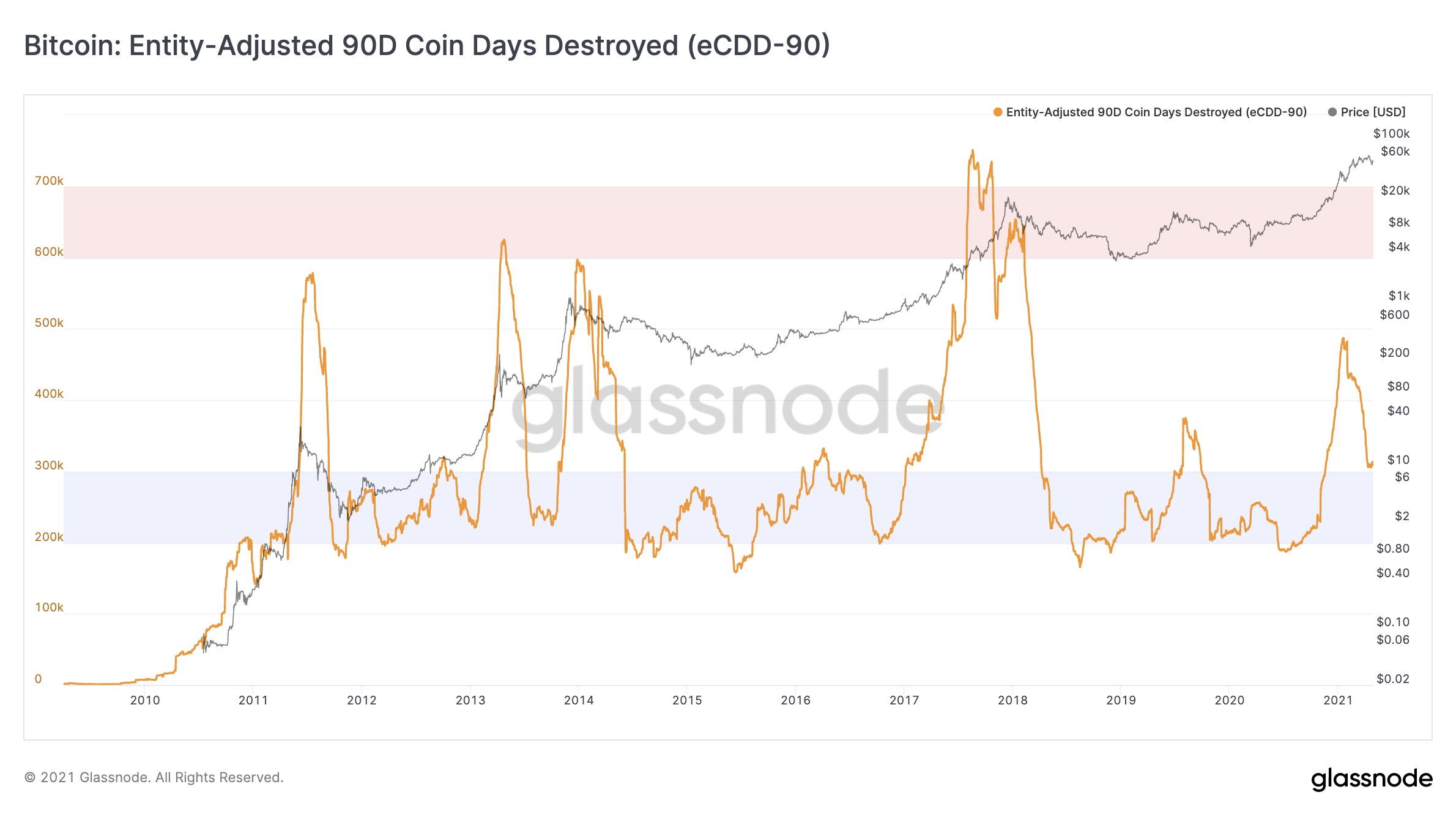 Looking at a multi-year timeframe, Glassnode shows increased hodling behavior from long-term investors as the percentage of circulating supply that has not moved in at least 5 years continues to surge. 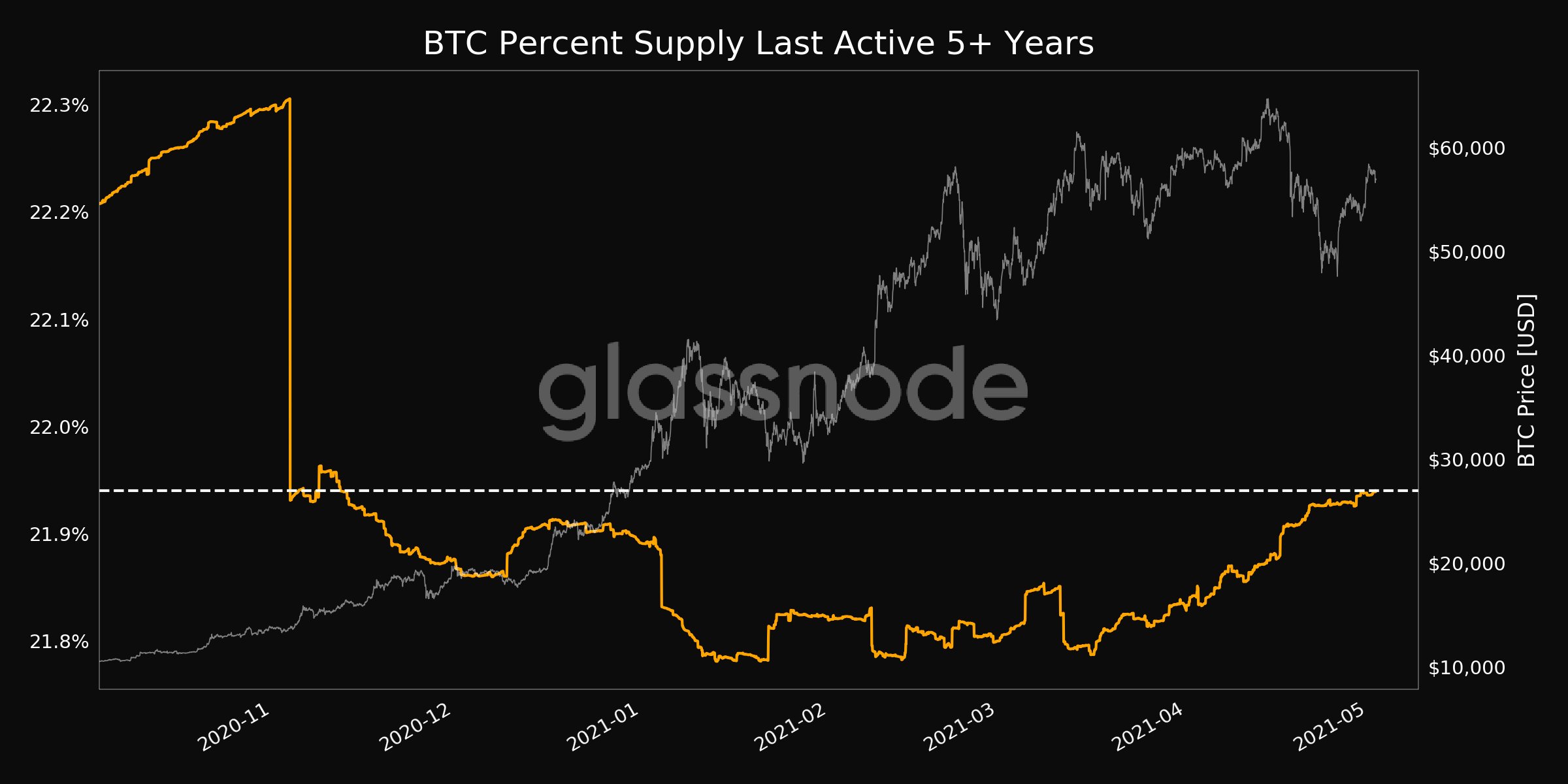 Over an even longer timeframe, Glassnode notes that the amount of coins that have not moved in over 10 years has hit a new all-time high (ATH). 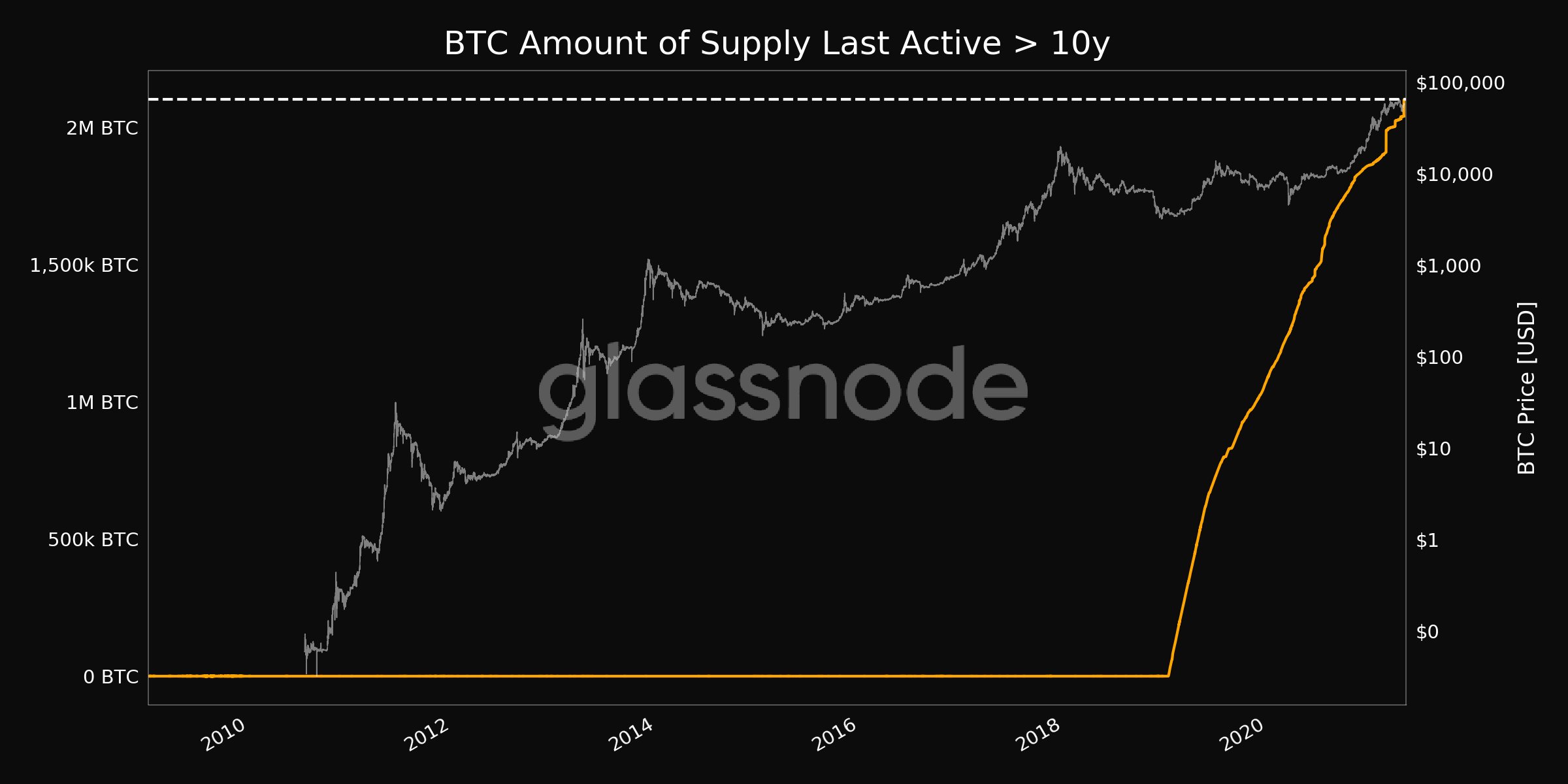 The surge in hodling behavior comes as on-chain analyst Willy Woo predicts that a BTC supply crunch is looming. Woo says that the supply crisis will be more drastic than the one that pushed Bitcoin to rise 2,000% in 2017.

“We can see this from tracking the flows of coins out of the exchanges, where typically people speculate or buy and sell their coins, and they have a set inventory, some of which is allocated for speculation. We’ve just seen an unprecedented amount of depletion of that inventory.

The post Here’s How Long-Term BTC Investors Are Playing the Bitcoin Consolidation, According to Glassnode appeared first on The Daily Hodl. 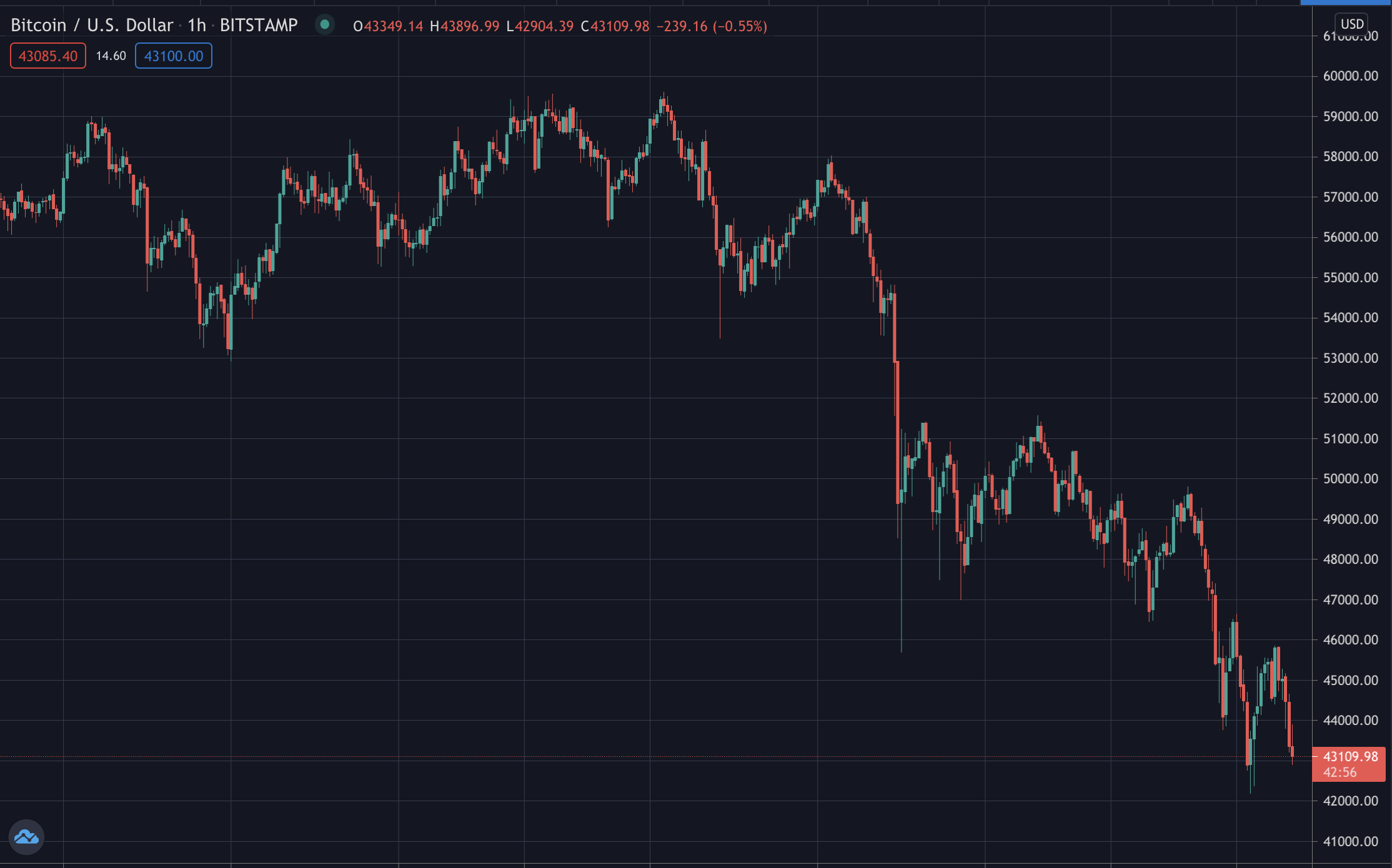